Raccoons in the Wall

Here are two photos of different situations involving raccoons in walls, and their removal.

In the above photo, I've cut a hole in the exterior wall of the home.  I discovered the raccoons in the attic, and eventually found them down the wall.  As you can imagine, there was no room to crawl at the tight edge of the attic, and there was certainly no space to remove them.  I put a ladder in the area, and felt for the warm spot.  The snare pole was used to remove it from a deep area - don't worry, this doesn't harm the little guy! 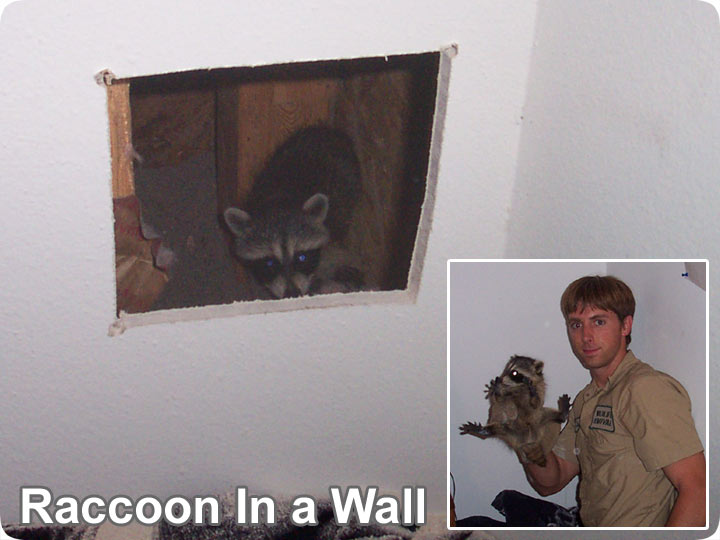 How do you know if you have a raccoon in your wall? Of course, the first thing you'll notice is the noise that they make. You'll surely hear scratching at the base of the wall, or the base of where the wooden frame halts progress to the floor area, and you'll also hear scratching and clawing as the animal climbs up and down the wall. It may be using a pipe to help it climb, or just the wall itself. But what differentiates the sound of raccoons from other animals that might live in the wall, such as squirrels, rats, or opossums? It's the vocal noises. Well, that, and the fact that a coon is much larger than a small rodent, thus making the sounds louder, slower, and "heavier" or deeper in pitch. But the vocal sounds are the real giveaway. Raccoons, unlike rats, squirrels, or opossums, have a wide variety of vocal noises, and tend to emit them, whereas the other animals do not. Raccoons chatter, growl, and make a whole bunch of strange noises. But most telling of all is the call of the baby raccoons, a chattering cry that sounds like nothing else. The babies make this crying call quite a bit, when they are hungry or cold, so if you've got raccoons down your wall, there's probably a nest of babies, and they'll be making this chattering noise.

If you have raccoons in the wall, there's a good chance that they're coming down the wall from the attic, so you may want to read about how to get raccoons out of the attic.

How do you get a raccoon out of your wall? There are several approaches. First of all, see if the momma raccoon can be grabbed with a snare pole, from the top of the wall, in the attic, and dragged out - not a task for anyone but the most experienced of wildlife professionals! Then the babies can also be removed via the snare pole. If the mom isn't present, just remove the babies and set them as "live bait" in the back of a trap to lure in the mother raccoon. But if the wall void is not accessible from the top of the attic, and about 75% of the time it will not be, then you'll have to cut a hole in the wall, such as seen in the above two photos. The mom won't stick around if you're using a saw to cut a hole in the wall. Just be sure you know where you're cutting first - don't cut right on the raccoons, dummy, or you'll hurt them! You have to listen and feel for the warmth of the raccoons against the wall, to identify EXACTLY where they are located, then you cut a hole next to, or most commonly ABOVE the raccoons. You can then use a thick glove or a snare pole, as seen above, and remove the young raccoons. Again, use the young to catch momma raccoon. A good wildlife pro will do the proper repair after removing raccoons from the wall.

A reader wrote to me, expressing concern about the correct use of snare poles on raccoons (and other mammals). Here is what he wrote:

I am a wild animal rehabilitator and volunteer at the Kentucky Wildlife Center in Georgetown Kentucky www.kywildlife.org. I applaud your page's content in regards to not harming the raccoons you find in walls. I do think that you should include in the body of the text the fact that you always have a snare pole around a leg and the neck of the raccoon, and not just the raccoons neck alone as you can easily break their neck with the rope around the neck alone. It appears you are using the snare correctly, but the photo is not clear and could seem like it is around the neck alone. - Ron

I do go around the neck and one of the front legs, in this case, the left front leg, even though you can't see the snare loop. Thanks to Ron for pointing out this important advice. Of course, I do not suspect that anyone but a licensed wildlife operator will be using a snare pole, but if you are a wildlife operator reading this, be sure to use the snare pole correctly - around the neck and one front leg.

Article topics include:
How to get rid of raccoons in the wall.
Get raccoons out of the wall and keep them out.
How to remove raccoons from inside the wall.

Wildlife Education - Information, Advice, and Techniques for the Safe Removal of Raccoons from Walls