Raccoons in the Ceiling - Guide to Removal 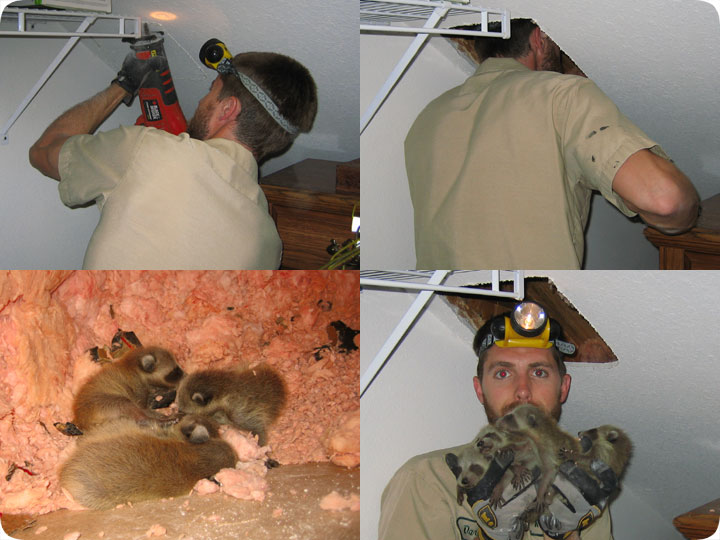 What to do when there are baby raccoons in a very hard-to-reach area?  What if there's no attic space to crawl into?  This type of work takes a lot of sleuthing and searching

The customer had been hearing a lot of heavy scurrying and scratching noise in the cathedral ceiling in this room. I saw a big hole in the roof, but there was no attic space for me to crawl in, because it was a cathedral ceiling (same slope as the roof, no real attic space).  I always assume that there's baby raccoons somewhere, which is true 80% of the time. Thus, I had to very carefully listen for any sign of baby raccoons, so that I could find them.

It would have been easy to simply set a trap and catch the female raccoon, like most raccoon removal companies would have done, but that would have left the baby raccoons inside the home to starve and die and cause an odor problem. I always work very hard to get the baby coons out of the attic, because I know that almost all of the time there's an adult raccoon in an attic, it's a female with a litter of babies.

In this case, I heard no noise, so I started to very carefully feel around the ceiling until I hit a warm spot. I knew that the litter of baby raccoons must be there, so I cut a hole in the ceiling (upper left), stuck my head inside (upper right), saw the nest of baby raccoons (lower left), and removed them all (lower right). I then fixed the hole and used the babies as live bait to catch the mom, fixed the hole in the roof, and the job was complete.  This type of work is not easy, and most wildlife removal companies will neglect to take care of a situation like this properly, and that's too bad.

Can baby raccoons chew through ceiling - Baby raccoons can chew through a ceiling, but will they? Probably not. Rodents are the ones you need to really worry about when it comes to breaking through barriers in your home. Unlike a rat or a mouse, the raccoon has no need to be constantly chewing. Babies will want to chew as their teeth come in, but they are more likely to chew on vertical surfaces just for ease of access. A mother might inadvertently break through one of the surfaces of your home as she creates her nest. Again, this isn’t the most common thing with raccoons, but it’s not something you can rule out entirely. As soon as you know you have a litter overhead, you need to take steps to find them and remove them. Baby raccoons are usually easy to handle with just gloves. Once you find them and remove them from the home, you can place them in a cage trap out in the yard to lure in the mother. Now the entire family can be relocated together. Keep in mind that trapping raccoons without a license is prohibited in many states. Make sure you are obeying the law in you quest to get rid of pests.

Below is an email from a woman who is having a bad raccoon experience, and part of the problem is that she hired bad companies!

David: I just had another "sleepless" night listening to those heavy noises in my attic and finally realized maybe I could google my raccoon suspicions and get some advice - so here came your wonderful article - I quickly printed it out and I just got through reading it. Now I'm more worried than ever, of course!

I only bought my house 4 months ago and the house where I lived for 14 years is still on the market and I've only had a handful of lookers ..... it's depressing and I'm already worried that I'll be continuing to pay two lots of utility bills from now on and money is tight. I realize now that I made a big mistake moving before selling the other house first. I just turned 65 this month - got my medicare card - so exciting!!! And my first social security check in the bank!!!! Then here comes the raccoon problem.

I don't know a soul in this new area. I moved from Houston to outside of the city, near what they call The Woodlands area - a suburb of Houston - about 30 miles from my last house. thinking it would at least be a little closer to Dallas which is where I have a daughter but I realize, too late, that not even having close friends or neighbors now is a huge mistake.

I've never been scared before, living alone. The first time I heard noises I thought a man was walking on my roof. The 2nd time I even called 911 for the Police because I was so sure it was a man!!! (I've never had to call 911 before). Of course, the two police officers couldn't find anything and left, probably thinking I was crazy! Then after realizing it had to be an animal I started looking around the outside of the house and could clearly see that the screened holes in the sofit boards on the eves had been penetrated. I started routinely boarding up an opening, only to find another one next to it was then broken into. This went on 4 times. I then realized I should continue to leave one open so the creature can go in and out until it's caught. I did call some professional companies but they all seemed to have different opinions and all were so expensive - I think just about all of them said they use cat food to bait the raccoons but your article ascribes not using a meat product. Anyway, I do know it's a raccoon because its feet must have been really muddy the other night because he or she left incredibly well defined prints all over and around the area where they got into my attic. (an obviously very acrobatic raccoon).

You mentioned you found some competent and effective experts in some citities and Houston was one of them. Could you refer one to me by name? I'm at the point now where I don't think I can continue to stay here at night, my nerves are absolutely shot. I've gone from one bedroom to another each night and now I hear then all over the house. When I went to a hardware store to buy some repellant (that I still haven't used) and to buy heavy wire and staples to board up the open holes I found a worker who had a trap and offered to come out and bait and set the trap in my attic, which he did 5 days ago but as you will have guessed, the animal is not taking the bait in the trap and at 4 a.m. yesterday and today at 5.30 a.m I hear the creatures still in the attic, so I'm back to square one.

This man, as well as another guy who came out here 2 weeks ago to quote me on setting traps (who was much too expensive for me to use) both went up in the attic and neither of them could see any animal droppings. They both said there was too much insulation to get through and they couldn't get to the area of the house where I had heard the most noise - but now, of course, I hear movement all over the house.

After reading your article I think I should try and noise and light in the attic plus the repellent and continue to board up all the other meshed soffit openings securely with the heavy duty wire that I bought (still leaving the one hole open, for now) - and remove the cat food bait and try and bread/marshmellow trail and bait idea maybe - but if you can recommend a "competent" Houston company to me then this will have to be my last resort and I would be so grateful if I didn't have to go from one incompetent and expensive company to another without any good results.

Thanks for listening - I'm desperate for a solution. But it sounds like I'm going to be in financial despair regardless. I know you said insurance companies should cover attic damage, but unfortunately I have one of the highest deductibles, I think it's 3% so I don't think that will help me. Please reply if you have any words of wisdom. Thank you Feona

Article topics include:
How to get rid of raccoons in the ceiling.
Get raccoons out of the ceiling and keep them out.
How to remove raccoons from the ceiling.