Raccoon in the Crawl Space - Under the House

I've seen raccoons living in the crawlspace under a house many times. If a home is elevated, with a crawl space underneath, and there's an easy opening, it's an open invitation for raccoons, cats, opossums, and other animals to live under there, just like under a deck or shed. The key, as usual, is to find the opening(s) and seal them shut, either when the animal is out, or when it's been trapped or removed.

Getting raccoons out of the crawlspace is easier than the attic, usually because it's easier to access the openings, and because there are fewer nooks and crannies. However, there are a few exceptions. If much of the perimeter is open, and there's not much of a chance of sealing off the crawl space without a lot of effort - like latticework or steel mesh around the entire perimeter of the home - then you're probably always going to have problems with animals living under your house. Another problem is if you have openings under the home leading up to pipes or up into walls. In that case, you could get raccoons up in the walls, or under the floor. 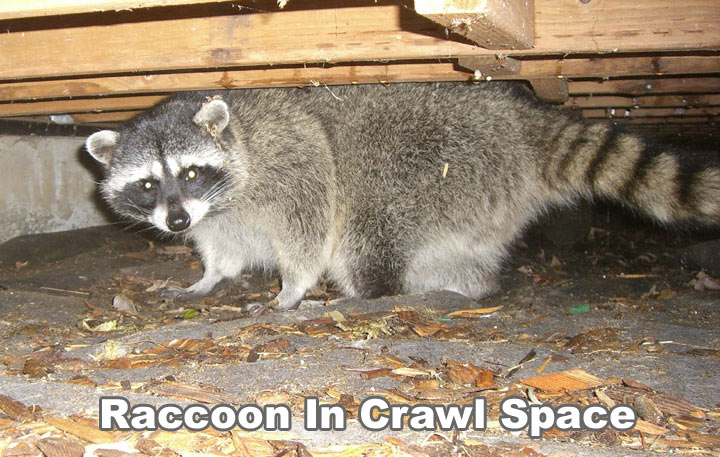 Raccoons are not really wild animals. They are urban animals. Raccoons are FAR more common in cities and suburbs than they are in undeveloped natural areas. Just like rats. Thus, raccoon-human encounters are very common. Raccoons are smart, curious, and agile, and they need a place to live, so they very often break into a house.

It's also worth noting that it's very rare to find a raccoon nest of babies below a house in a crawl space. They always have the litter of young off the ground, up in the attic or walls, or up in a tree, but never below the house. So any raccoon living in the crawlspace below a house is most likely a male raccoon, or a female without any young, so that's one relief about crawl space animal problems.

If your crawlspace is sealed off, or of you've got a perimeter barrier, you may wonder Do Raccoons Burrow Or Dig Holes? to gain access to the crawlspace. The answer is not really. Though they are resourceful and can pry areas open with their strong hands, they aren't a burrowing animal.

Do I have to remove a raccoon from a crawlspace if I rent? - This question is up for debate, and until you ask a judge or a lawyer, you’re not going to have an absolute answer. As a renter, if you have a raccoon in your crawlspace, that animal does pose a potential health threat to you and your family. For this reason, if you presented your case, your landlord would likely be responsible for removing it. That being said, even though the landlord may be responsible, you might not want to wait that long for action. Landlords are notorious for dragging their feet when it comes to getting things done. A raccoon will continue to make loud noises and cause damage while you wait. Though the damage to the home isn’t your responsibility, it could lead to a potential fire hazard—something you should be very concerned about. If you are on good terms with your landlord, the best route of action may be to hire a professional yourself and have the landlord reimburse you. Make sure you get all agreements in writing, especially the one that states you will be reimbursed.

Actual Situation: Hi David, I just Googled raccons in the crawl space and ran across your guide. I wish I had done so before! We had a female raccoon and two babies last year, and all three left our crawl space, only to return a year later. We successfully trapped all three grown raccoons and my husband took them 3 miles away about a month ago. Last night the mother returned! We know it is the same raccoon because of her entrance and how she climbed through the bathroom wall up to the attic. We are attempting again tonight to trap her. We will be taking her far away! Is there any chance that her grown offspring will do the same? We trapped them over three different nights in the span of a week and released them in a very nice wooded creek area 3 miles away close to downtown Dallas. Do they find each other once relocated? We just want to be sure that we don't seal up the way she's getting in permanently if there is a chance that they are here. She is bigger and makes lots of noise, but the year-olds are almost undetectable. The only reason we know there were three is because we saw them. Thanks in advance for any advice or information. Sarah

My response: The mother will return year after year, and should have been relocated 10 miles away. The three probably did not re-unite, and the young definitely are not coming back this year. They don't have the same nesting instinct as the mother. If they survived, they've found their own spots.