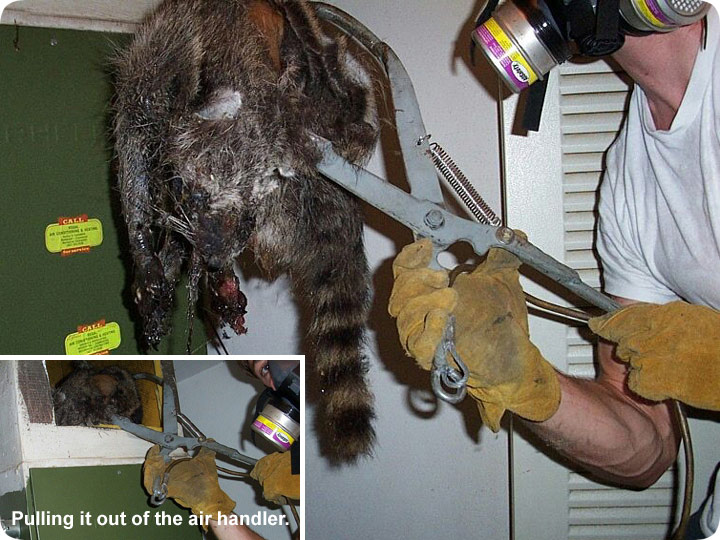 It's not terribly common, but one of the dangers of having raccoons in the attic is that if they die, they die in the attic, and then while decomposing, the odor is terrible. I've dealt with many dead animal removals from inside attics, and only a few have been raccoons. However, the odor has always been very strong, because of the size of the animal.

I was called out to this house at which the odor was unbelievably wretched.  The owners weren't even living there any more. I knew, as did the owner, that a dead animal lay somewhere in the house, rotting.  I put on my HEPA filter mask and searched all around. I searched the attic extensively, but I couldn't find the source of the odor. Amazingly, I did find some living baby raccoons. I suspected that the mother raccoon must have died somewhere, but I could not find it. The smell was so powerful throughout the house and attic that I could not narrow it down. After much exploratory searching, I went back into the ceiling and I noticed that much of the duct work in the attic had been torn open. I wondered if a raccoon had crawled through the ducts. I continued to search and sniff around, when suddenly I stuck my head into one of the ducts, and the odor was just a knockout, even through my mask. I knew that the raccoon had to be inside. I looked around and noticed that this duct came directly out of the air handler. There was no access to the air handler from the attic, so I went back into the house, and motioned that the animal was inside the air handler.

I had to cut it open, so I got my knife and cut an opening in the air handler, and sure enough, therein lay the dead and rotting raccoon. I believe that it became electrified and died on the coils inside the air handler. I got a log-gripping tool. As I removed it, all sorts of sparks flew. It was dangerous, but I did not get shocked. With thick gloves, I removed all of the spare bits and pieces, and bagged it all and sprayed the area and fixed the air handler. The owner of the home was incredibly grateful. It had taken about an hour and a half. He gave me some of his native Cuban raisin wine.

There's another interesting part of this story. While conducting my search, I even searched outside the house for clues, and there, in the gutter, I found another living baby raccoon. It was over 100 feet away from the other raccoons, and tiny and its eyes were still sealed shut, and it had somehow crawled away and out of the attic and outside into the gutter. The resilience and will to survive of these animals is absolutely astounding. These little babies were only 2-3 weeks old, and hadn't yet starved. I collected the young and put them in a warm, safe, box, and later brought them to a wildlife rehabilitation clinic.

Here is more information about How to find a dead animal in the house.