Raccoon Outside in the Daytime - Is it Rabid?

Many people think that a raccoon that is outside and active during daylight hours has rabies. People know that racoons are nocturnal animals, and usually only active at nighttime. So if a raccoon is out and about during the day instead of night, something is wrong, right?

While it is true that a rabid raccoon will exhibit a variety of unusual behaviors, activity during daytime is most definitely not a guaranteed indicator of rabies. You see, although raccoons are primarily nocturnal, they do often get some stuff done during the day. It is not at all unusual for a raccoon to be active in the middle of the day. They can't just sleep from dawn to dusk without doing anything. They may go off in search of food or drink. This is especially true of nursing female raccoons, who have a bunch of babies to take care of, and who have extra nutritional requirements, because they are nursing their young. In the spring, you're sure to see some mother raccoons gathering extra food during the daytime, so that they can produce more milk.

How can I tell if a raccoon has rabies? Rabid raccoons are very sick. Mostly, they are lethargic. Their walk may be erratic, or their legs paralyzed. They may be walking in circles or falling over, or lurching in an unnatural fashion. In short, they just plain look sick. If you see a raccoon outside when it's light out, and it looks agile, alert, is running or foraging in a smooth and coordinated and normal manner, then you can be almost certain that it doesn't have rabies. This doesn't mean that you should approach it and offer it a lick of your ice cream cone, but you most likely have nothing to worry about. 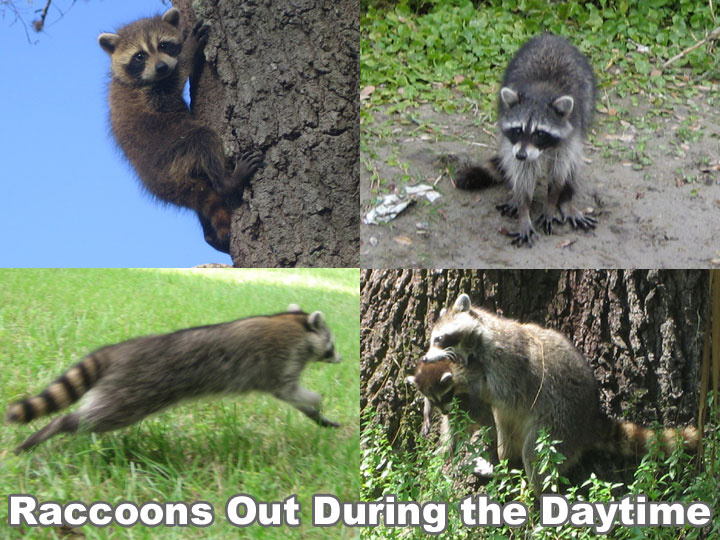 What to do if I encounter a raccoon out in broad daylight - If you see a raccoon, no matter what time of day, leave it alone. Never try to feed it or approach it. Seeing a raccoon out in the day isn’t an immediate cause for alarm. There are many reasons why this nocturnal animal might be out and about. If you live in an urban setting, or if the year has been bad for food, raccoons will change their habits to fit when food is most available. If you always put your garbage out at 1:00 in the afternoon, the raccoons in the area will learn that. A raccoon out in the daytime that is lingering in your yard, seems overly friendly, is acting unstable, lethargic, or is walking in odd patterns, should be reported to the police. Most police stations will come out and shoot a raccoon that may be ill. The body is then sent to the health department where it will be evaluated for possible infectious disease. Aside from odd behavior, seeing a raccoon out in daylight does not always mean the creature is ill. Humans are active primarily during the day, but if you get up to go to the bathroom in the middle of the night, you hope your neighbor doesn’t assume you are a threat.

Click to learn more about other raccoon diseases other than rabies. Click here for my full guide on raccoon trapping tips.

As most people are already aware, raccoons are primarily nocturnal creatures. They normally spend the lighter hours of the day near their den, asleep. However, since raccoons have high adaptability, and can change their habits to find the best available source of food, it's not surprising to see them active during the day. This is especially true of urban raccoons that forage from commercial and residential garbage cans, and of raccoons that are brave enough to seek handouts from passersby.

Rabid raccoons do exhibit abnormal behaviors, including walking around during the day, but finding one during the lighter hours isn't enough to call a raccoon rabid. Depending on the time of year, it's likely that a diurnal raccoon could be partaking in the mating season, if it has not done so already. Additionally, a mother raccoon out with her kits during the day is more than likely taking them on a hunting trip, to show them how to forage.

There are a number of reasons why raccoons will venture out into the sunlight. If a daytime raccoon is in fact rabid, it is easily distinguishable from its healthy counterparts. There are several, telltale symptoms of a sick raccoon which most people can recognize immediately, with careful observation and a little forehand knowledge.

Normal raccoons behave deliberately, with steady physical movements, but sick raccoons will appear disoriented, and have been known to walk in circles, stagger, and even fall over. Also, sick raccoons will appear lethargic, overly aggressive, or overly friendly (though this may also be true of raccoons adjusted to being fed by humans). A raccoon with apparently paralyzed hind legs, or a raccoon dragging its hind legs behind it, are also indicative of rabies. Of course, foaming at the mouth and sensitivity to light and sound are both dead giveaways. In short, if a raccoon looks and acts sick, then it should be clear what's going on.

Caution should be exercised around all wildlife, including raccoons. If you happen to come across a raccoon in the daytime, do not approach. More often than not, a healthy raccoon out and about will be on its merry way without a human's intervention. If it appears that the animal is foraging from local dumpsters or garbage cans, try locking the lids or putting them out at different times of the day, respectively. The problem should then solve itself.

If you find a raccoon denning itself up in your home, e.g. in your attic, contact a local raccoon removal expert for assistance. Raccoons left unchecked can cause severe damage to homes, leaving homeowners with massive repair bills.

If you suspect a raccoon is sick, contact animal control immediately. Only those who are licensed to do so may tranquilize any animal, in order to assess the animal's needs and put them down if necessary. If you are not sure, contact a local wildlife rehabilitator, and they can help you determine whether the animal needs help.

Actual Situation: Hello, today I went to my parent's home and saw a large raccoon that has apparently dug underneath their shed in the backyard. I'm a little nervous because I saw it out diring the daytime, and I'm wondering if it's sick or has rabies. I'm simply curious how much it'd cost to trap it and have it relocated back into the wild. They live in Alexandria near Mt. Vernon. To them it's no dire rush nor emergency as they don't even want me to have it removed, but I'm concerned because I see it moving during the day. As well, money is naturally tight due to the recession. Just price checking. Please respond when you can. Thanks for your time.

My response: Daytime behavior doesn't mean rabies - it's a common thing for these animals to do. I don't service the Alexandria area, but I do have a guy that I know who does wildlife removal there. Just click on my directory, and you'll find his number, and you can call him for a price quote.

Actual Situation: Hello, I heard and saw a raccoon on my roof yesterday afternoon. It was outside in broad daylight. I saw him jump off. This morning I saw shingles lifted off in different areas, I checked my attic and there doesn't appear to be any damage. No signs of entry. What are the chances he/she will return to my roof? Is it true that it has rabies if it's active during the day? Thanks Barbara

My response: I don't know the chances that it'll return to your roof, but if it's established a home up there, or in the attic with roof access, then it will certainly be back. The fact that it was up there in the first place indicates that it has a reason to be there, and the missing shingles might mean that it's working to break its way in. And no, daytime activity is not a sign of rabies.

Where do raccoons go during the day? They usually nest in trees, or in hollow logs or in your attic! They sometimes come outside in the morning or afternoon or middle of the day or any time before sunset to eat or drink.