Noises in the Attic at Night

If you hear noises in your attic at night time, there's a good chance that you have a wild animal or two living in your attic and maybe scratching on your roof. I'll do a quick analysis of the types of noise you might hear in your attic or roof at night:

Thumping: If you hear thumping in your attic at night, it's most likely a larger animal, such as a raccoon or opossum, engaged in jumping from one area of the attic to another, actively shoving or destroying something, or dragging something heavy.

Scratching: Most animals scratch in the attic, to clear out space for nesting, or maybe to bury food. Raccoons, rats, mice, and squirrels all scratch. You're most likely dealing with a nocturnal animal since you hear noises at night, so it may not be squirrel. The size of the animal is hard to tell - many factors influence the volume of the noise. A little mouse scratching directly on the sheetrock right above your head in a quiet house will sound louder than a big raccoon scratching a wood beam somewhere far off in the attic, in a house with a lot of background noise.

Vocal noises: Most likely raccoon. Rats, mice, opossums, and squirrels don't make vocal noises in the attic. This is a good clue that you've got a raccoon or a family of coons. Read below for the details regarding raccoon noises.

Raccoon Noises: It’s often possible to determine the type of animal by the noises alone. Raccoons are the largest of these animals, so the sound is often “heavy” – more like thumping or walking than the light scurrying of a rat. Additionally, raccoons are primarily nocturnal, so the noises occur at night. Most of the noise might happen shortly after dusk, when the animal leaves the attic, and again sometime in the night when it returns. However, the timing of the noise may vary, and sometimes raccoons will stir during the daytime. In addition, raccoons are often vocal, and it’s possible to hear their various growls, chirps, cries, and other noises. If there’s a raccoon family, consisting of a female and a litter of baby raccoons, you will very often hear the very distinct and unique crying and whining of the babies, surefire evidence of raccoon presence. 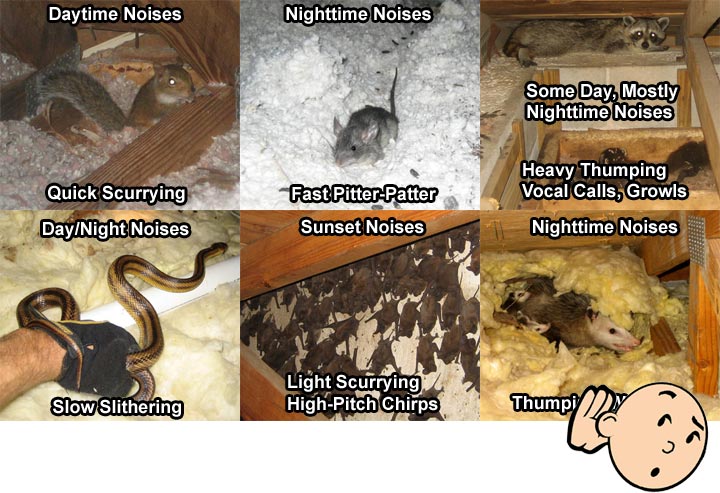 If you are hearing lighter, faster, pitter-patter noises, or scurrying up the wall, or daytime noises, and don't think you have a raccoon, but maybe rats, squirrels, etc, this website has detailed information on every different species of pest wildlife that inhabit homes: www.wildlife-removal.com.

So, scratching sounds in the attic at night could be from a number of different nocturnal animals. It could even be from the heating/cooling system, or branches of a nearby tree scraping against the roof. But most of the time, it's an animal, and it's pretty easy to tell when the noises are coming from something living. The methods used to solve problems by a number of animals, such as squirrels or rats are similar to raccoons in some ways - find the openings, remove the animals, fix the openings, clean the mess - but in other important ways, different animals require different approaches. This website really only deals with raccoons, but I've written guides for several animals, so either click the above wildlife-removal site, or you can even email me if you have any questions.

What sound do baby raccoons make - The sound baby raccoons make is a complicated on, full of chitters, warbles, vibrations, and screeches. The chitter is the most characteristic sound, and people can often verify the presence of babies just from the noise alone. If this is the sound you are hearing inside your walls, remember where it is. To properly catch and remove the adult, finding the babies is important. You can use the babies in a partitioned trap to lure in the mother. This is one of the most effective trapping methods for catching live raccoons. Sometimes you have no choice but to catch the mother first. If this is the case, and the kits are hidden in an inaccessible wall, knowing where they are by sound will help you when you have to cut an opening in the exterior of the home. You have to remove the babies; there is no other choice. If you leave them in the building to starve, you will still need to find them later when they start to stink. The only way to get rid of the odor from a dead body is the remove the dead body. If you wait for it to go away, you’ll be waiting months.

If you do hear the noises of a raccoon nest of babies, you'll probably notice that it's coming from above, in the ceiling, from the attic space, or maybe the walls, but never below, like in the basement or crawlspace below a house. Females have an instinct to make the nest up high, and the same goes for many other animals, like squirrels.

Read more articles about raccoons:
About Raccoons
How Do I Know If There Are Baby Raccoons In the Attic?
How to Keep Raccoons Out of My Bird Feeder
How to Catch a Raccoon with a Snare Pole
...........

Real reader Situation: David, I had a new roof put on last fall and just a few weeks ago I heard something on my roof (tri-level home) and I'm hearing noise in my attic at night. It was right by my bedroom wall. I went downstairs and looked out the front window and sure enough was a raccoon bending over the gutter. The next day I had my neighbor look in the garage ceiling (storage) he didn’t see any holes, than he looked in the ceiling of my other bedroom to look at the roof and no holes there. The raccoon came back last night but I couldn’t see him. I only have a few evergreens close to the house could he be climbing up those to get to the roof. I don’t know what to do. Should I ask the roofer to come back to the house and inspect my roof for any holes, would they try to climb through a vent, I really I’m starting to worry about this. I don’t want them coming into the house. Any suggestions? Thank you, Kathy

Are those bumping and scratching sounds in the attic, or on the roof, or both? If it's inside the house, then the animal already got in, of course. Sometimes raccoons can open holes that are surprisingly hard to find, such as vents or soffit covers that open and close. If you don't have an animal inside, then just double check to make sure that everything is secure. If you do, you may want to hire a pro in your city to remove the animal(s).

Wildlife Education - Information, Advice, About Sounds in the Attic at Night