Repellents are the first and easiest thing that you can try if you have raccoons in your attic or chimney. Especially when a female raccoon is concerned about having a safe place to raise her young, a harassing presence including any scent (predator urine is good, as is raccoon eviction fluid discussed below) and noise (radio) might encourage her to leave the attic with her young.

That said, in general there are many long-standing old wives’ tales about animals and repellents, and there are many modern products sold meant to evict unwanted critters from property and homes, and most all of them are bogus. Some of the old-fashioned standards include naphthalene (moth balls), ammonia, bleach, and even human hair. The idea behind these repellents is that they simply create an unpleasant odor that raccoons don’t like, which encourages them to leave. In my years of experience as a wildlife removal professional, I’ve seen many of these tactics used in an attempt to evict raccoons. I’ve never seen them work, but that’s also because in the cases they do, I’m not called out. The problem is that an attic is large and well-ventilated, and the odor isn’t very strong. A raccoon will often just move to another, less offensive part of the attic.

Even in cases in which the odor is strong, it’s not enough incentive to make the animal leave. Once a raccoon has established a home in an attic, it takes more than a bad odor to make it leave, because it (or the babies) truly might not survive if it has to leave, so a little (or even very powerful) scent isn't going to do the trick – you wouldn’t abandon your home if someone spread some mothballs inside. This is a wild animal that needs to survive, and it will tolerate quite a bit in order to keep its home. That includes all of the current repellent and deterrent products sold. 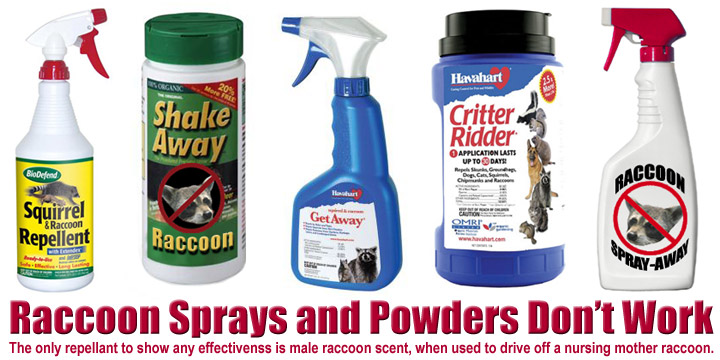 If you do an online search, you will find all sorts of raccoon repellants sold, many with confident money-back guarantees. Most of them are made of …mothballs. In fact, most animal repellents sold are made from either mothballs or coyote urine. I’ve been to many homes at which the homeowner has placed a great deal of mothballs in the attic – one had fifty pounds of mothballs! – and the raccoons didn’t care. They also don’t respond to coyote urine. Some people recommend the use of bright lights, strobing lights, or noises. The most common noise deterrents are regular radios and ultrasonic high-pitch sound emitting devices. Once again, I’ve seen both of these tactics used multiple times to no effect. In fact, the FTC has issued an official warning against the high-pitch noise machines, stating that they are 100% ineffective and fraudulent.

A product called raccoon eviction fluid sometimes works on a female with young.  This fluid is from the glands and urine of an adult male raccoon.  A male raccoon will kill any young not its own, so that the female goes back into heat.  Thus, the scent of a male might convince the female to move away.  This product is usually only available to trappers.

It’d be nice if a simple product would solve the problem. That goes for any most any cheap and easy fix for a serious problem. The truth is that repellents rarely work. Go ahead and try every one of them if you’re not convinced, and then take care of the problem properly when you discover that cheap repellents and deterrents are pointless.

If you want to enlist the help of a professional, I believe that most of the wildlife control operators listed on this wildlife removal directory, which includes listings for 450 US cities and towns, do a competent job. I've also compiled a list of good raccoon experts in several major US cities. But before you hire anyone, be sure to read this guide and gain a good understanding of the matter at hand, and ask whoever you wish to hire the right questions, and be sure that they remove the baby raccoons as part of their wildlife control solution! If you want to use a repellent for raccoons in the house, as stated, the eviction fluid will help in cases with young.

Wildlife Education - Information, Advice, and Techniques for the Safe Removal of Raccoons from Attics