Raccoon Infestation - Are They Becoming Domesticated?

Raccoons are not really wild animals. They are urban animals. Raccoons are FAR more common in cities and suburbs than they are in undeveloped natural areas. Just like rats. Thus, raccoon-human encounters are very common. Raccoons are smart, curious, and agile, and they are reproducing quickly in many cities, leading to raccoon infestations in several areas. Here is a photo example of raccoon domestication in an urban area.

Raccoon infestations are becoming more common. For unknown reasons, sometime in the 1970's, pretty much nationwide, raccoons began a transition from wild animals to urban animals. They have become more commensal, living in conjunction with people and taking advantage of people, rather than avoiding humans. It's somewhat of a mystery why this happened, but the transition is still underway. Telemetry studies of raccoon populations routinely demonstrate that raccoon population densities are considerably higher in urban rather than non-urban areas. In fact, raccoon populations are usually ten times as dense in cities as opposed to the country.

I believe this change is part of a natural process in which raccoons are becoming more domesticated. I think the same thing happened with dogs and cats. Humans didn't seek these animals out - they started to hang around people because of the benefit. Humans are good at gathering resources, like food and shelter, and so some dogs found that they could essentially pick up the scraps, and so they started to hang around people. Same with rats. And cats presumably started to live near people because they wanted the rats and mice that human cities attracted.

Raccoons are attracted to garbage from cans and dumpsters, pet food, and they like to live inside human dwellings, from sheds, to crawlspaces, roofs, and of course, the point of this site, attics. If the animals can shed their fear of people, they can live near them and enjoy the benefits of living near people. These benefits most commonly include food and shelter. Animals need the same things as people, so why not take advantage of what people provide? Not many folk hunt raccoons or fur trap any more, and raccoons have simply learned that they're better off at surviving in cities. The population numbers prove that.

The problem can become even worse if people deliberately feed raccoons pet food or other foods. Raccoons may seem docile, and for the most part they are. Read more about Do raccoons attack people?. In some cases they can be aggressive, but not usually.

In some areas, raccoons have caused a full-on infestation. Large groups of raccoons sometimes rove in packs, seeking out dumpster food or handouts. I have seen attics filled with several raccoons. If I stand outside at night and simply watch the streets for a few minutes, I see the distinctive hump-like back and walk of raccoons crossing the streets, back and forth. There are a lot of them!

Of course, with all of these raccoons vying for human resources, conflicts are bound to occur, and boy do they ever! That's why people like me exist - the nuisance wildlife control operator. I'm not a pest control company or an exterminator, but a wildlife removal specialist. I solve problems between people and these great, but numerous, animals that now share our urban and suburban habitats. Give me or any of my hundreds of friends on my directory a call if you need help with a raccoon infestation in your area. 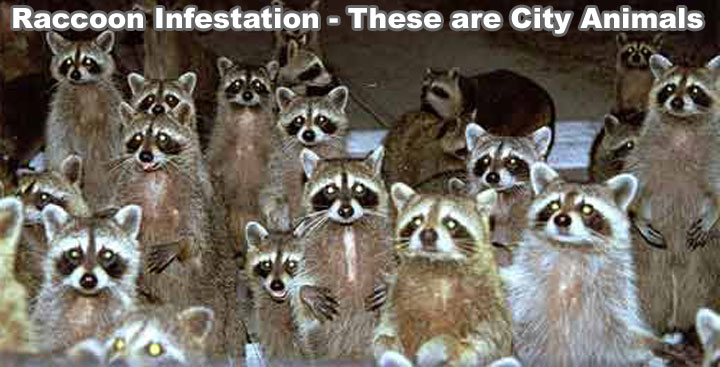