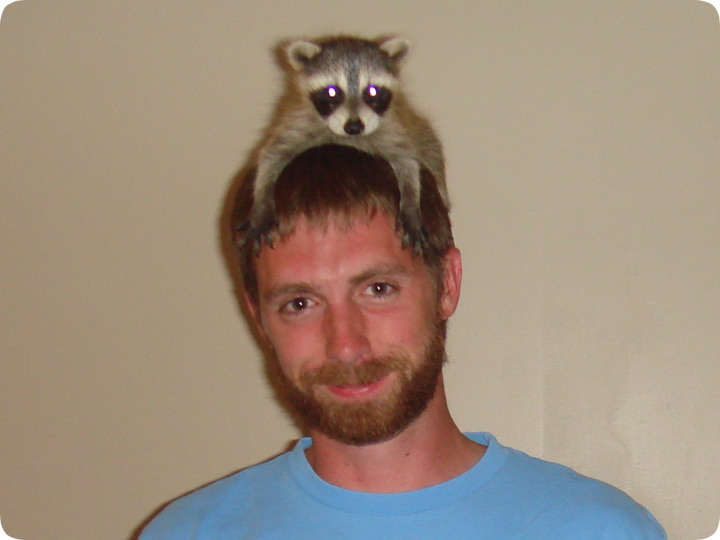 I wanted to wear a coonskin cap
To imitate Davey Crockett
I wondered if I should set a trap
Or pay for one out of pocket
If I bought the hat, what's the sport in that?
And what about my wallet?
Shell out the scratch, or make a catch
It's heads or tails - you call it
If I set a trap and caught a coon
Then I'd have to skin it
That'd make me feel like a goon
I thought it over for a minute
What if, I thought, I made the catch
Thus saving me some dinero
But then I chose not to dispatch
Thus making me a hero?
Ah, I thought, now that's the ticket
Have my cake and eat it too
So I set a trap within the thicket
And waited for you-know-who
Sure enough, I had success
I caught a black-masked little chap
I brought him home and prepared to dress
In my fancy new coonskin cap
I brushed it off and put it on
It looked pretty good, I must say
But there's one thing I wasn't counting on
My coonskin cap jumped off and ran away
* The raccoon featured in this photo was one from a wildlife rehabber that I work with, and has received rabies and distemper treatment, and is parasite-free. Although the rehabber took the above playful photo, she and I would like to remind people that raccoons are not meant as cuddly pets. In fact, one should never make a pet of a raccoon for many important reasons. They are wild animals, and should be treated with respect.