Do Raccoons Burrow Or Dig Holes?

SHORT ANSWER: Raccoons can dig, but they don't dig out large burrows or holes to live in, or for any other reason. They sometimes, though rarely, dig for food, or maybe to gain access to a new area, such as under a fence. But they are more likely to climb than dig.

Whether you live in the woodlands or your house is situated near a park and a flowing stream, you are likely to get visits from raccoons in the very least. The persistent creatures will also try to move in with you especially when they discover a food source in your yard. Raccoons are bold animals, though not particularly confrontational. They will visit your yard over and over again, leaving shallow holes and a huge disarray each time.

The English word “raccoon” is an adaptation of a native Powhatan word meaning – animal that scratches with its hands. The raccoon is quite adept at scratching the soil and digging little holes as it searches for earthworms, grubs and a variety of soil insects to eat. Fallen fruits as well.

The culprit for the dug up holes in your yard could actually be any of several animals that are common yard visitors – skunks, moles, or raccoons. But raccoon holes are characterised by ripped up chunks of sod that have been flung over carelessly. 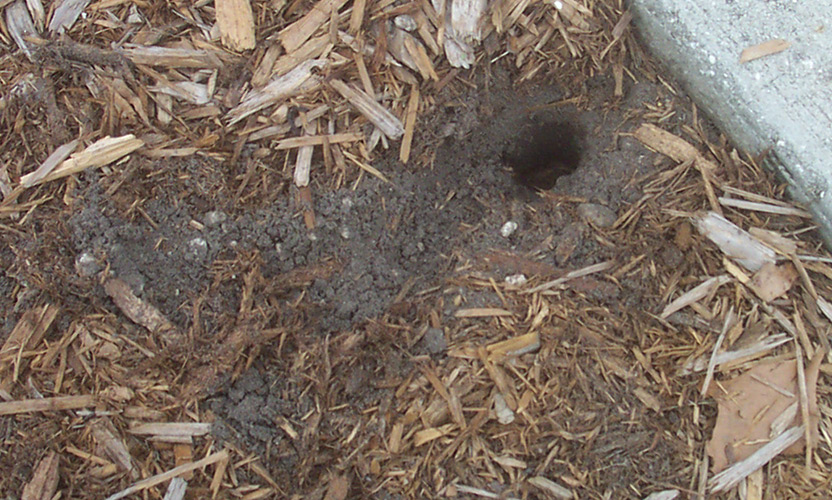 Raccoons dig with their front paws which are very nimble and can grasp foods and objects almost as well as human hands. They habitually pull up newly laid sod and greenery with shallow roots, practically tearing them out of the ground.

Why do raccoons dig holes? It usually boils down to food or shelter. Sometimes when the winter bites hard, the raccoon would dig an underground burrow where it can sleep for weeks in order to preserve its body heat. This state is referred to as topor, and is different from hibernation because the animal is not inactive for the long stretch; it simply sleeps for extended periods and has active periods in between.

Raccoons mostly prefer to use the abandoned dens and burrows of other animals, but in the absence of this, they would dig their own burrow. The time of the year thus affects the raccoon’s frequency of digging, with more digging going on in the fall and spring.

In the fall, most animals are trying to gain as many calories as possible so they can make it through the winter. The more body fat that they pile up, the better their chances of surviving hibernation or topor during the cold months. In the spring as well, the same animals are trying to regain lost weight.

The digging habit of raccoons is a huge bother for farm and garden owners as it can result in some major damage for them. To learn more about do raccoons burrow or dig holes visit the Raccoons in the Attic home page.